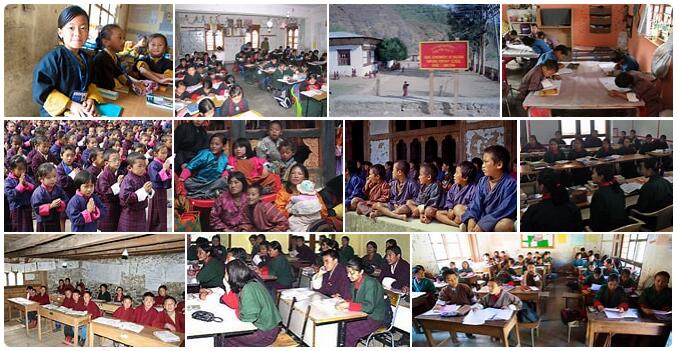 The education system in Bhutan has undergone major changes since 1990. The content of the education has been nationalized. The primary school consists of 7 grades, the first of which is considered preschool. Most schools are boarding schools.

The children start school when they are 6 years old. After educational reforms, the percentage that does not complete schooling has dropped from 20% to 5%. Now approx. 70% of children in school. High school consists of 2 + 2 years. English is the language of instruction.

60% of the adult population is considered illiterate.

Thimphu, capital of Bhutan; 79,200 inb. (2005). Thimphu, as the headquarters of the country’s government, is mainly an administrative center, while the economic and trade center is Phuntsholing. Thimphu is located in the valley of the same name in western Bhutan at an altitude of 2200 meters. Until the 1960’s, Thimphu consisted of a small number of small shops around the Tashichodzong Abbey complex, built in the 1600’s. This is where Je Kempo, the supreme lama, lives in the summer with a large number of monks. The area also houses the government offices and the king’s office. Until 1953, the king and the government moved every year with Je Kempo to the winter headquarters in Punakha. Now the King lives all year in a modest residence in the Thimphudalen.

Since the late 1990’s, the city has received a beginning migration from rural areas. The first election for the city government was held in 2002. Bhutan’s first television station began airing in Thimphu in 1999.