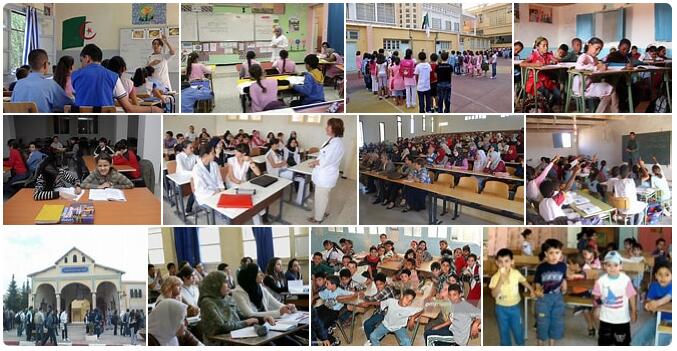 The education system in Algeria is based on French, and prior to release all formal education was conducted in the French language. Many older people read French but not Arabic. Since the release, extensive Arabization campaigns have been carried out, i.e. through the introduction of an Arabic-language elementary school and the abolition of the private (often Catholic) schools in the 1970s and 1980s. However, there have been strong student protests that the Arabization program has gone too slowly. So, for example, a large part of the teaching at the universities is still in French. At the same time, many Berbers, who make up almost 20% of the population, believe they are disadvantaged, since Arabic is a foreign language to them. From a French-oriented point of view, Islamization is seen as a threat to modern development and, not least, women’s right to education.

Education in Algeria is free at all levels and (in theory) compulsory. Nine years of compulsory schooling rule from the age of six. The school system consists of a 6-year primary school and a secondary school of a maximum of 3 + 3 years. The education system is severely under-dimensioned, mainly due to high birth rates and strong immigration to the cities. Officially, about 95% of all children in primary school start, but at the three-year high school the dropout rate is just over 30%. The lack of teachers, classrooms, textbooks etc. and the fact that many children must contribute to their livelihood explains the great dropout. For girls, the fact is that schoolgirls have been threatened and even murdered in or on their way to school by extreme groups who want to set examples. Since the beginning of the 1990s, however, the girls have been in the majority in the secondary school.

In 2008, the education sector accounted for 20% of government spending. Large investments in the school have resulted in literacy among the population rising from 57% in 1992 to about 73% in 2006 (81% of men and 64% of women). Among young people aged 15-24, about 11% of girls are not literate, while the corresponding figure for boys is 6%. Algeria has about ten universities, including Université d’Alger (founded 1879). However, many places their university studies abroad, especially to France.